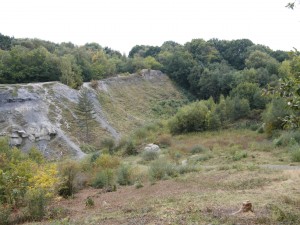 It was a cool and grey day when we met at 10.00 in the main car park adjacent to Saltwells Inn. Once again our leader was Alan Preece, the Head Warden, who was only too keen to show off his new toy – a Polaris Ranger 4×4 vehicle – acquired by the Council. Although very useful, it proved a little tricky getting it in and out of Doulton’s Clay Pit.

Alan’s plans are to clear much more of the clay pit to expose the sandstone at the far end of the quarry and around the pool at the bottom. Our day involved clearing scrub and saplings from the slopes of the Coal Measures exposures, which had become overgrown again since our last visit. Alan pointed out that much work needs to be done within the cutting of the incline and at the Brewin’s Bridge Cutting. During our visit to this part of the site on the 40th anniversary field trip last July, it was noticeable how overgrown this had become, in particular the exposures of dolerite that are no longer visible. Given the sensitive nature of the Brewin’s Bridge Cutting it is hoped that we can return there this coming February to start clearance works. Doulton’s Clay Pit will require much clearance and ongoing maintenance to keep on top of it.