This geoconservation session was changed from the advertised site (Barnt Green Road Quarry), since it was felt that there was more to be done at Rose Hill. BCGS members last visited Rose Hill Quarry during a field visit to the Country Park in June last year. Then the quarry was very overgrown, thick with trees and it was difficult to see much. 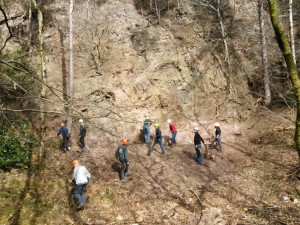 Since then the Country Park wardens and the Lickey Hills GeoChampions have been putting a lot of work into the quarry. Many trees and much vegetation, such as rhododendron, have been removed and used to form a dead hedge along the quarry perimeter. There is also ongoing work to reduce the piles of spoil in front of the main quarry wall to produce a level platform across the quarry floor, while exposing the lower parts of the wall. It is hoped that conditions on the quarry floor can be improved to make access easier, put in official walkways and create marshy habitats for wildlife. There are also plans to include an interpretation board in the quarry.

The main wall of Rose Hill Quarry comprises an exposure of the Lickey Quartzite, which according to a paper written by Professor W.S. Boulton (Birmingham University) in 1928, also exhibits an example of thrust faulting within this stratum. There are no obvious signs of such a feature in the parts of the exposure currently visible; however it is anticipated that this could be deeper down, beneath the spoil that covers the lower parts of the wall. 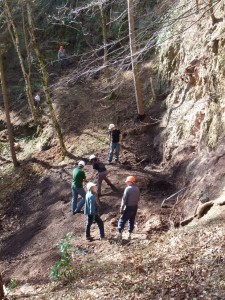 We met with Julie and the Lickey Hills Wardens and GeoChampions at the Nature Reserve’s Visitor Centre, at 10:30 on a cold and cloudy spring morning. After collecting tools we made our way to the quarry to begin work shovelling spoil and exposing tree roots from the base of the main quarry wall. The quarry looked very different from how it had during the BCGS visit in 2014 – more open and light, with the main wall more visible.

Finishing at around 14:30, with much achieved but much more to do, it was decided to hold another clearance session in this quarry before the summer onslaught of vegetation growth. All the sites we visit require ongoing maintenance and further work doing to them and they all require the attention of hard working volunteers to help with the battles of encroaching vegetation, Government cuts and misuse. All this hard work not only helps to rediscover local geology and help wildlife, but is also beneficial to local communities, and brings with it a good degree of satisfaction and well being.

I would like to thank the various reserve wardens for their time and all those who have helped out over the past seven months. We look forward to seeing BCGS members helping out on 10 May and when the autumn season starts later this year.