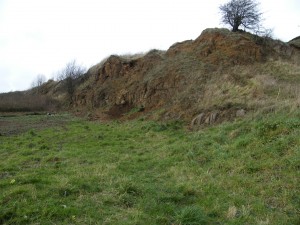 This was a cool, cloudy and windy day when we met Paul Stephenson (Birmingham and Black Country Wildlife Trust) at St. Brades Close at 10.30. Paul, along with regular work parties from the ‘Friends of Rowley Hills’ have been keeping on top of the vegetation at this site. The plaque on top of the monument cairn has been replaced, as the last one was vandalised, and the adjacent seat has undergone some repair and strengthening work.

The vegetation in front of the main dolerite exposures had been cut, cleared and treated to keep down the undergrowth such as brambles. This has allowed the protected grass and wildflower species to recolonise the area. We continued to clear more bramble and undergrowth from the exposures and up towards the boundary of the nature reserve. Efforts were also made to excavate down the face of the dolerite exposures. Not only has this revealed more of the dolerite exposure, but excavated material soils are being use to form a level platform in front of the exposed face.