References cited in the text are listed at the end of the trail. Hover over words in red (or click if you have no mouse) to see a definition (usually taken from Wikipedia). The stone varieties shown in green in the trail text can be found in our Index of Stones. The index also shows some of the buildings where the stones can be found and gives reference information about the stones.

Trail 3: Around the Shops

The name ‘Birmingham’ is derived from the Anglo-Saxon Beormingahām, alluding to the home of the Beormingas clan and their settlement here was probably established as early as the 7th Century A.D. However the centre remained a poor region until the later 12th Century when Peter de Bermingham, local lord of the manor, developed a market centre around his castle, in the area that is now the Bull Ring. From then Birmingham’s economy began to take off and it became established as a small market town. The Bull Ring has also been shown to be an area of light industry at this time. Archaeological excavations carried out during the latest phase of construction in the early 2000s have revealed evidence of potters’ workshops and leatherworks during the 13th Century. 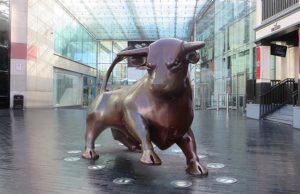 This building stone walk focuses on the old centre of Birmingham, around the church of St Martin in the Bull Ring and the surrounding shopping malls. The area demonstrates continuity as a centre for trade and retail but the building materials used here have changed beyond those that would have been familiar to Peter de Bermingham and his family. The area has been transformed over the last two decades, and though the oldest part of the city of Birmingham, it is now the symbol of a new vibrant centre, with the covered markets replaced by glamorous shopping malls. Malls are modern cathedrals in terms of delivering the double whammy of decorative stones and public access. They are built to impress and the polished surfaces provide excellent opportunities for observing fossils, minerals and textures. This walk will take in the new shopping precincts of the Bullring and Grand Central as well as the surrounding retail areas. It will end by taking a detour to Holloway Circus to visit the Pagoda.

The main source on the architecture of the buildings visited, unless otherwise cited, is Pevsner’s Architectural Guide to Birmingham (Foster, 2007). Information on public artworks is largely derived from Noszlopy & Waterhouse (2007). This is the third and final part in series of guides to the building stones of Birmingham City Centre (see Siddall et al., 2016a & b), produced for the Black Country Geological Society.


This walk starts on Temple Row, and can be combined with the first walk in this series which ends at the Cathedral yard (Siddall et al., 2016a). The first stop is a small but well worthwhile diversion from the main route. Walk down Temple Street to the branch of the stationers Rymans at number 20. 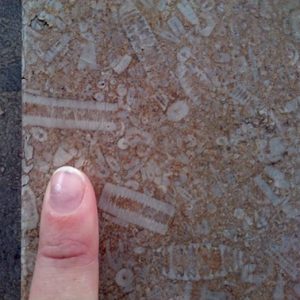 1. Rymans, 20 Temple Street
The purpose of this diversion down Temple Street is to visit what appears at first glance to be the unassuming shop front of the stationers’ Rymans. This is one of Birmingham’s top fossils spots (right). It is clad with a limestone called Derbydene. This is an ‘encrinite,’ now a rather old-fashioned word, referring to a limestone predominantly composed of the fragments of crinoids. More correctly it would be called a biosparite today. However, here the crinoids are so spectacular that it seems fitting that we apply a rock name which draws attention to this. The crinoids here are big and cannot be missed, with ossicles a centimetre or so in diameter and articulated stem-sections up to ten or more centimetres in length. It is quarried from beds in the Lower Carboniferous (c.340Ma) Eyam and Monsal Dale Limestone Formations around the quarry district of Cromford in Derbyshire.

Now retrace your steps back up Temple Street towards the Cathedral and turn right into Temple Row to 61-63 Temple Row.

2. 61-63 Temple Row (Formerly Allied Irish Bank)
The building on the corner of Temple Row and Needless Alley is properly called Union Chambers. It was designed in the 1930s by architects Ewan Harper, Bro. & Co. The ground floor was remodelled to accommodate the Allied Irish Bank which has now closed. Looking up, the building is clad in Portland Stone, but of main geological interest here are the decorative granites used to clad the lower floor. Several granites, probably added at different times, are used to clad this building, which is why this façade looks a bit patchy.

The bank’s logo was fixed on to a blue, igneous rock. Although above eye-level, even from a distance, this is recognisable as one of the world’s most popular decorative stones and also Norway’s national stone. It has been quarried on a commercial scale since the 1880s and has become very popular. This is Blue Pearl Larvikite, one of several varieties of this stone quarried from the Larvik Plutonic Complex, located in the Oslo Rift in the Vestfold of southern Norway, some 80km south of Oslo. The Larvik intrusions form a ring complex, intruded during the formation of the Oslo Graben in the Permian between 292-297Ma. The ‘BluePearl’ variety, so-called because of its strong blue colouration, predominantly an optical effect brought about by the ‘schillerescence’ of the feldspars, belongs to the Tvedalan Sub-Type of the intrusion and is quarried in 14 locations around the villages of Tvedalen and Auen. Larvikites, like many rift-associated igneous rocks, have unusual mineralogy. The schillerescent feldspar is an oligoclase perthite. The rock is often referred to as a syenite, however due to this plagioclase component, it is more properly a monzonite by composition. The feldspathoid mineral nepheline is also present. The mafic phases are the black mica variety lepidolite, the pyroxene titanaugite and titanomagnetite.

We now turn to the granites which are used to clad the verticals around the door and between the windows. Unfortunately one of the main stones used is a granite of unknown origin, with blotchy, white plagioclase phenocrysts in a matrix of pale brown potassic feldspar, grey, translucent quartz and clots of black biotite mica. Also used are a very pale coloured leucogranite and a brown granite with strongly aligned phenocrysts. The leucogranite is a variety of Sardinian Granite, with phenocrysts of slightly yellowish feldspars. This colour effect is partly due to incipient alteration of these minerals to form clays. Some of these crystals also show zoning. Grey quartz and black biotite are also present. This stone is quarried from the Buddosò Pluton, located in the north east of the island of Sardinia. It was intruded during the Variscan Orogeny 300 million years ago.

Above, left to right, brown granite, Sardinian Granite and Cornish granite. All images are at the same scale, field of view = 15cm.

The darker-coloured, foliated granite is a variety of Cornish Granite. This texture is generally referred to as the ‘small-megacrystic type’ due to the brick-shaped feldspar phenocrysts, and granites with this texture were mainly acquired from the Carnmenellis and Bodmin Plutons. At 300Ma, the Cornish Granites are the same age as the Sardinian Granite above, and related to the same mountain-building event, the Variscan Orogeny. Both suites of granites were intruded late into this orogenic phase. Unlike the Sardinian Granites which contain only biotite mica, the Cornish granites are two-mica granites and silvery muscovite is a distinctive component of the stone used here. Biotite is present in black flakes, showing a weak alignment. Plagioclase and grey quartz are also present in the groundmass.

Next door, just across Needless Alley are the offices of the CBRE. 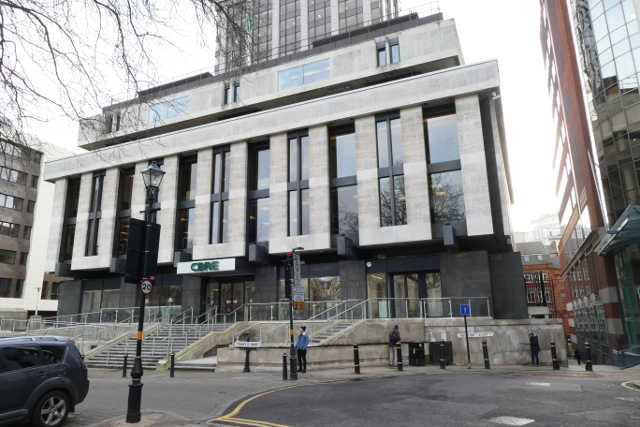 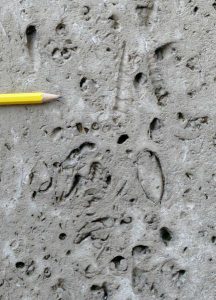 This building, between Needless Alley and Cherry Street formerly housed the Bank of England, and was designed by Fitzroy Robinson & Partners (1972). It is now occupied by CBRE, a firm of California-based property developers. Two stones are used here; an unusual variety of Portland Stone and a brown granite. The Portland stone is best seen from ‘exposures’ at eye-level on the Needless Alley façade. This stone is packed with fossil fragments. It is Fancy Beach Whitbed, a variety of Portland Stone which is much richer in fossils than normal Whitbed. It can be distinguished from the Roach facies in that the latter is dominated by cavities where fossils have been completely leached out. Fancy Beach Whitbed is packed with fossils but not all of these are leached out. The facies is particularly rich in the oyster Liostrea sp. and also debris of the algae Solenopora portlandica. The main shell varieties that are leached moulds and casts are from the bivalve Trigonia, and the gastropod Aptyxiella portlandica, (the ‘Portland Screw’). This facies named and worked by Albion Stone is mainly quarried in Jordan’s and Inmosthay Quarries on the Isle of Portland. Like all varieties of Portland Stone, this is an oolitic calcarenite of late Jurassic age.

Blaubrun Granite is used to clad the entrance façade at the top of the steps. ‘Blaubrun’ literally translates from the German as ‘blue-brown’, referring to the brown potassic feldspars and bluish, strained quartz. This blue colour is an optical effect. Blaubrun is a coarse-grained, ancient granite from Sweden, one of the 1.8Ga Flivik-Hökhult Suite, with the main quarries located in the Ångeholm Pluton. This suite of intrusive igneous rocks is part of the Transcandinavian Igneous Belt which runs from Lofoten in northern Norway for 1400km to Blekinge province in south-east Sweden. They were emplaced in the Småland region of south east Sweden. They are exposed along the coast and the quarries are only accessible by boat. The rock also contains biotite and plagioclase.

Walk 3 continues on the next page…

References can be found on the last page of the walk (3.5).