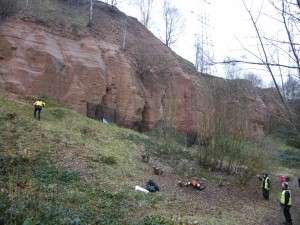 The day was cold and windy with light rain at times. We met Helen Sanger (Senior Countryside Ranger, Walsall MBC) at around 10:30 in the main Barr Beacon car park, prior to going into the quarry.

We spent the day clearing bramble and beech saplings from the floor of Pinfold Lane quarry in an attempt to open up the view of the exposures making up the eastern quarry wall. There is still much to be done and it is hoped that eventually we can produce enough of a view to see clearly the contact between the Hopwas Breccia and the overlying Kidderminster Conglomerate. Future plans will include improving the paths with material from the site and producing interpretation boards.

The coming of spring has brought to an end the current season of conservation works until the end of the summer / autumn. I would like to thank those who have taken part so far and hope to see more members on future days out. In April, our first field trip of 2014, along with the Warwickshire Geological Conservation Group, will include a walk round some of the sites we been working on, including Barrow Hill, Barr Beacon and Rowley Hill.