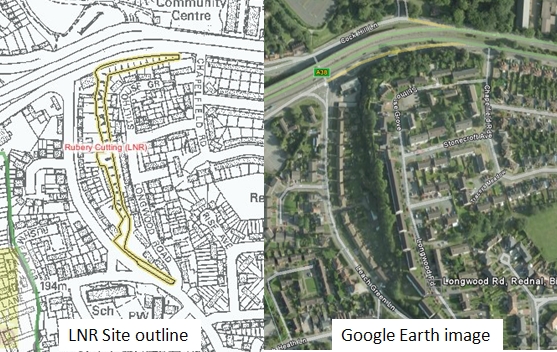 Rubery Cutting (SO992774, nearest postcode B45 9XS) is situated at the northern end of the former Leach Green Quarry, and is geologically linked with other abandoned quarries in the Lickey Hills Country Park 1km to the south, and Rubery Hill (SO990777) to the north. These abandoned quarries have many excellent rock faces of high scientific, educational and aesthetic value. The Lickey Hills ridge forms a prominent landmark along the A38 between Junction 4 of the M5 and Longbridge. The Rubery Cutting is the result of road widening in the 1920’s. For its geological significance, the Rubery Cutting and Leach Green Quarry were together designated a Local Nature Reserve (LNR) by Birmingham City council in 1991.

Features that can be seen at the Rubery Cutting include:

Strike and dip sections of the Lickey Quartzite (Ordovician, circa 488 million years old) with examples of cross-bedding.

Weathering features, including a full soil profile from turf to solid rock.

A very clear unconformity of about 50 million years is represented by an obvious eroded upper surface of the Lickey Quartzite, on which marine shales and sandstones of the Rubery Formation rest unconformably.

The quartzite surface shows fissures filled with sediments from the overlying Rubery sandstones. These ‘Neptunean dykes’ imply that the fissures were present in an eroded rock surface of the hard quartzite rocks before the ancient sea swept in and deposited sediments across amd within them.

A distinct vertical dyke of crystalline igneous rock with chilled margins cuts through the Rubery Sandstones some way along the Leach Green Quarry exposure. This section is accessed through a locked gate at the corner of the LNR along a narrow passageway between the quarry face and houses (see map). The gate key was formerly available from the Lickey Hills Visitor Centre, but the passageway has become overgrown since the LNR designation and is currently inaccessible (March 2016). Close to the igneous dyke are further examples of cross-bedding and Neptunean dykes, with a fine example further south along the exposure of a hollow in the quartzite filled with rounded pebbles. It is hoped that in the future this section of the LNR will again become accessible.

On Rubery Hill there are further exposures of the Lickey Quartzite, and the topography of the surrounding area can be studied, with the Birmingham plateau to the east and the imposing Lickey Hills to the south.

The Rubery Cutting is particularly important in terms of the interpretation of the sedimentary and volcanic history of the region, from the early Ordovician to the early Silurian periods. It is of particular value when considered together with exposures in the Lickey Hills country park, notably Rose Hill, Warren Lane, Barnt Green Road, and Kendal End quarries.

All of the geological features and the human history of stone extraction conspire to make the Rubery Cutting a particularly important, easily accessible site. Following a long period of neglect, in 2012 this section of the LNR was substantially cleared of heavy vegetation through funding awarded as part of The Birmingham and Black Country Nature Improvement Area (NIA) scheme. Parking is available in a small car park to the rear of the nearby shops, or under the adjacent A38 flyover. The exposure has a moderate to low slope angle which should not lead to any hazard from falling rock fragments from above. The exposures on Rubery Hill are approached from a flight of steps leading from Cock Hill Lane. The exposures here are open with gentle slopes, and should provide no difficulties of access or safety to the responsible and reasonably able visitor. 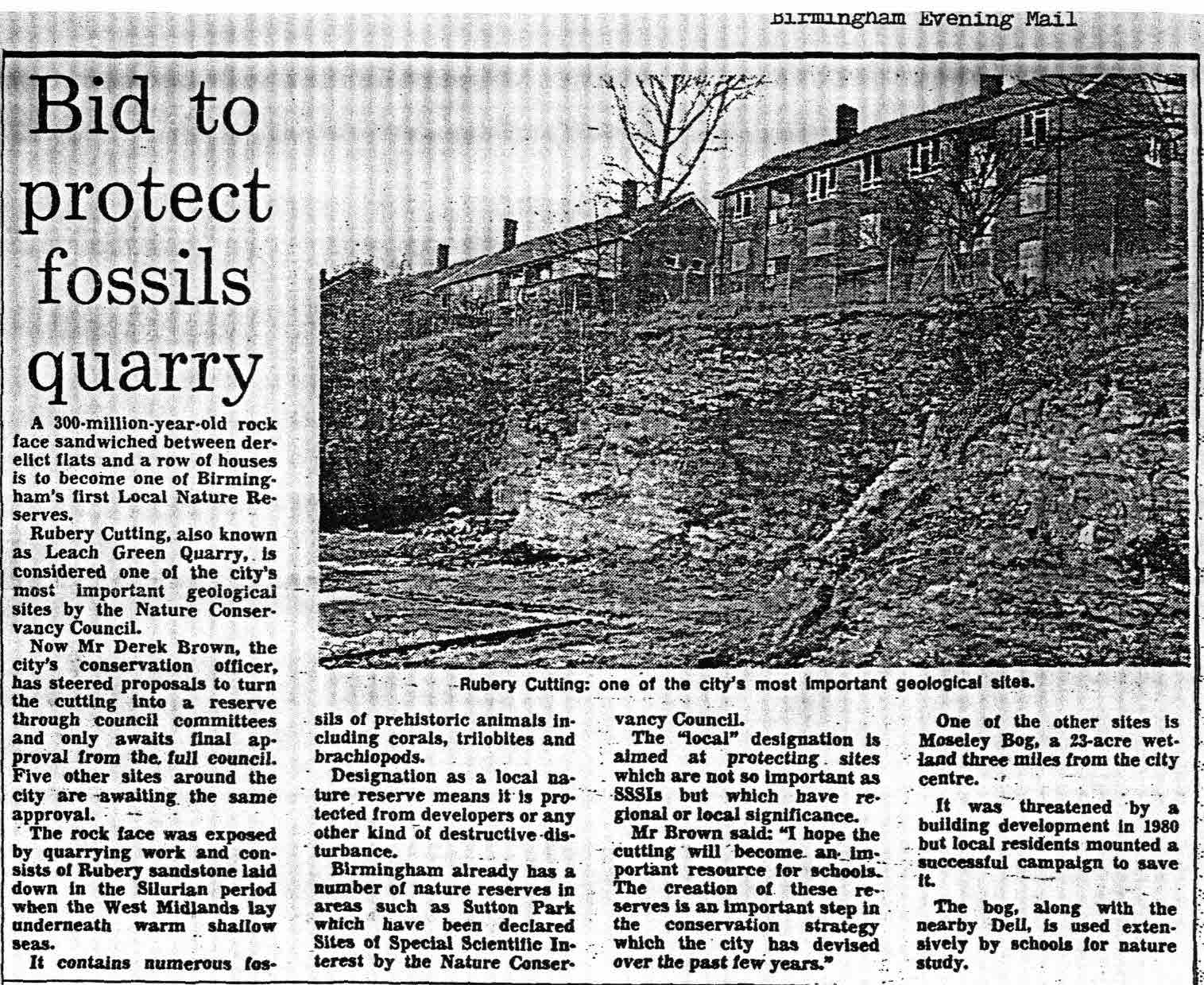 Rubery Cutting as it looked in 1989