On late 19th century Ordnance Survey maps, the Windmill End area is a complex smattering of canals, earthworks and collieries. Vast open areas are dedicated to industry, punctuated by smoggy villages whose inhabitants work the mines and factories. Transecting everything is the long gone Netherton & Halesowen branch of the Great Western Railway. As with so much of the Black Country, this area has an industrial legacy that spans centuries. Another feature this site has in common with so many others is how unrecognisable it now is compared to its late Victorian industrial apex. Post-war housing sprawls atop the old colliery land, and acres of former spoil and earthworks are now draped with woodland and greenery. Standing on this site today are Bumble Hole & Warrens Hall Nature Reserves.

Bumble Hole is smaller and the lower of the two, marking the eastern boundary of Netherton. Warrens Hall occupies the broader green slope ascending upwards towards the village of Springfield (and ultimately Rowley Regis). Why exactly this contiguous area is considered to be two nature reserves remains somewhat elusive to me, but conveniently these reserves are amalgamated into a single Geosite of the Black Country UNESCO Geopark. In stark contrast to a century ago, this is now one of the best places locally to escape from the noise and bustle of modern life, to go for a walk, and to admire the expansive views towards Clent and the Malvern Hills. 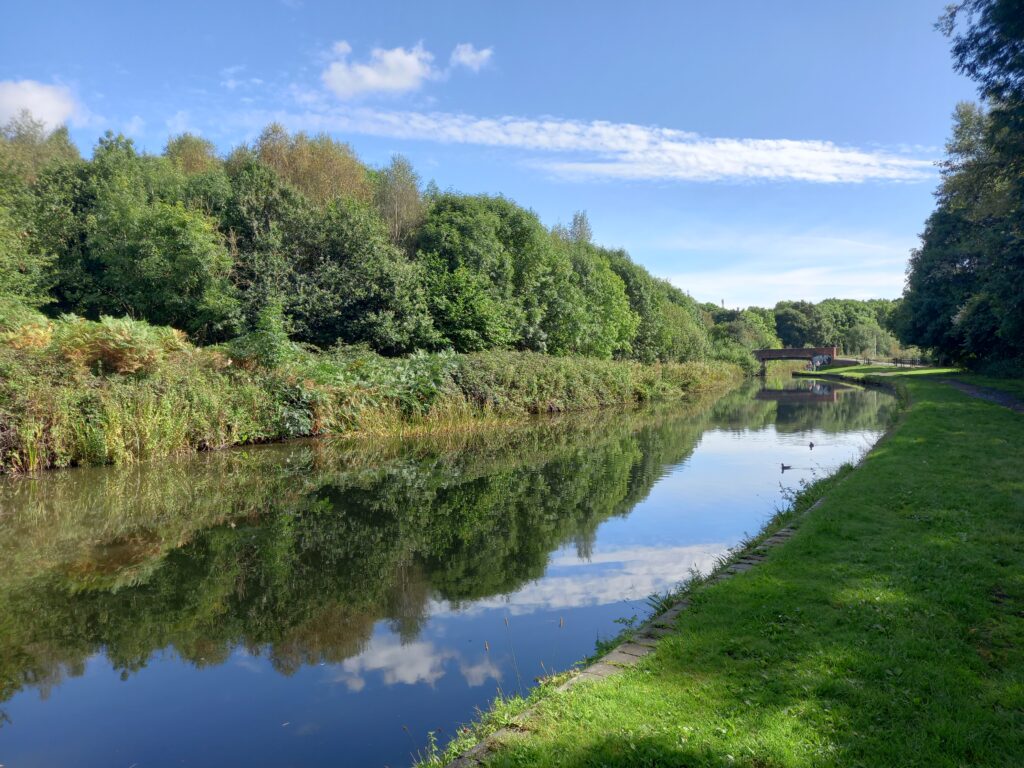 A peaceful stretch of the Dudley No.2 Canal in Warren’s Hall Nature Reserve 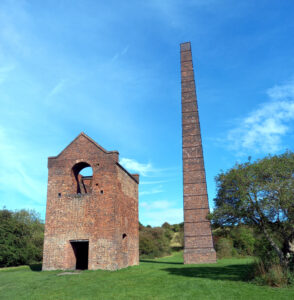 Geologically, the area shares much in common with the surrounding coalfield. A relatively thin cap of Etruria Marl, only a few tens of metres thick, covers the Carboniferous Middle Coal Measures. Dozens of pits were sunk around this site to access the abundant coal seams. The Etruria Marl thickens towards the north-east in this area which, combined with increasing elevation of the topography and the vertical movement of faults, leave the coal too deep underground to be easily reached in the adjacent Rowley Hills. The Marl itself also offered economic opportunities – its clay layers can be processed to make the blue bricks that were common in this area.

Whilst the railway and factories are now gone, the one conspicuous component of those departed industries remains: Cobb’s Engine House, also known as Windmill End Pumping Station. Cobb’s is the external shell that protected the machinery inside from the force of the elements. It was built in the 1830s and housed a Newcomen-type steam engine that ceaselessly transported water from the coal mines below into the nearby canals. Windmill End Colliery Number 3 pit, which was kept dry by this engine, was active from 1830 to 1925. Shortly thereafter, in one of the Bumble Hole’s stranger historical footnotes, the steam engine was acquired by the American industrialist Henry Ford for the princely sum of £130 (roughly £7000 in 2022). Ford was obsessed with acquiring English Newcomen engines to occupy his vast museum of Americana and industrial history. The engine has lived in his Detroit museum for the best part of a century, and it can still be visited today. If any readers happen to find themselves in Dearborn, Michigan, keep your eyes peeled for a small piece of Black Country history! 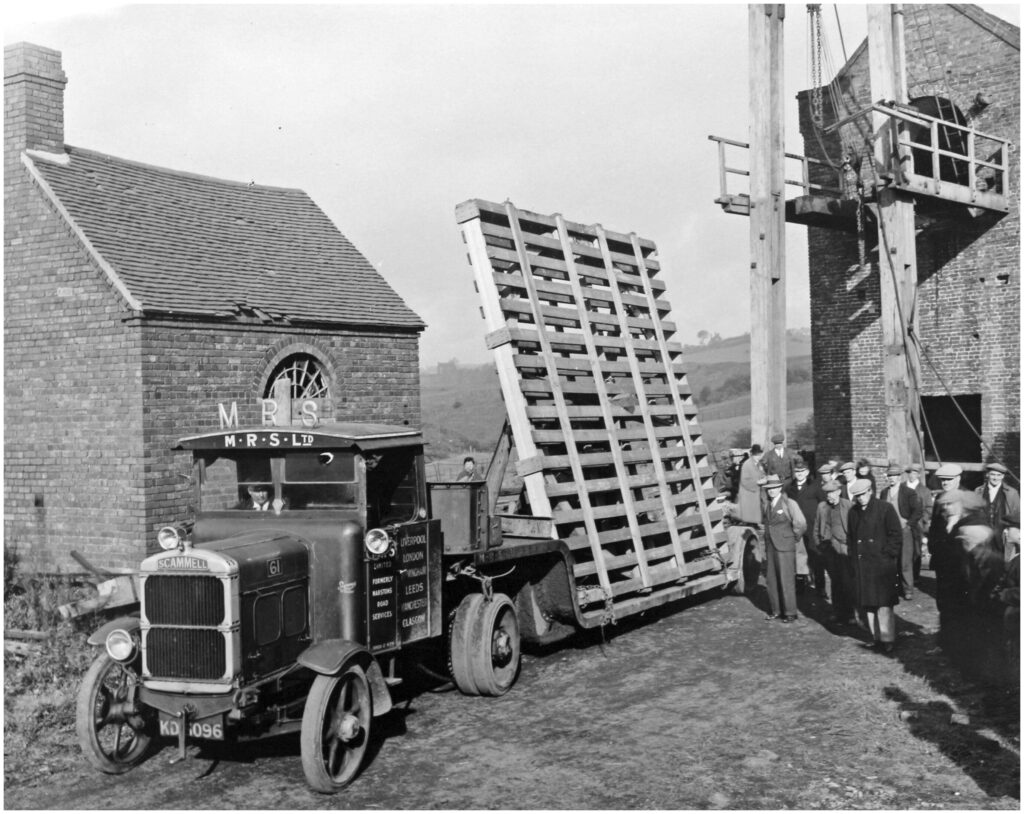 The dismantling and removal of the Cobb’s Engine House Newcomen Engine, for transport to the Henry Ford Museum in Michigan, circa. 1930.

Following the cross section to the east, we enter the Rowley Hills and what I believe must be the largest extant hole in the Black Country. There can’t be many other places in the UK where sprawling housing estates so closely surround an area of major mining activity. Rowley Rag, the dark crystalline remains of magma that intruded the Earth 300 million years ago, was extracted from the Rowley lopolith intrusion at this site (see the October 2021 Newsletter for more geological background on Rowley Rag). Perhaps mercifully for locals, the quarry stopped operating within the last decade and work is ongoing to gradually refill and restore the landscape to a more natural state.

It’s tempting to look on the demise of the Black Country’s extractive industries with sadness and nostalgia. Mining and quarrying, and the industries they generated, undeniably forged the Black Country identity, fuelled the industrial revolution and drove an increase in domestic wealth and living standards. We might also remember the costs of these industries too, not just in the human lives that were lost and shortened through hard labour, accidents and pollution; but also in the vast inequalities that emerged between the owners of the mines, forges and houses, and those whose work actually generated the improvements in living conditions that we now benefit from. The closure of Edwin Richard’s quarry is the latest in a long line of post-industrial changes to the Black Country. But perhaps we can hold out hope that the ultimate outcome might be a healthier ecosystem, greater access to the land and its history, and a better environment for human beings to enjoy.

This article was written for BCGS Newsletter 274 by Matthew Sutton, 2022.

Simon Briercliffe’s excellent article further explores the interwoven connection of geography and history at this site: https://uptheossroad.wordpress.com/2015/04/17/tekkin-the-wammel-up-the-cut-a-landscape-history/
Image of Newcomen Engine removal from the Windmill End Pumping Station (Cobb’s Engine House) is courtesy of the Henry Ford Archives, Dearborn.
A comprehensive history of Henry Ford’s 1928 visit to the UK and his search for surviving Newcomen engines, including a description of the acquisition of the engine discussed in this text, is provided by this 2018 academic paper (it is, unfortunately, behind a paywall):
Perrett, D., 2018. Henry Ford’s 1928 English Holiday Part 1–In Search of Newcomen Engines. The International Journal for the History of Engineering & Technology, 88(1), pp.37-56.
https://www.tandfonline.com/doi/full/10.1080/17581206.2018.1463683
A brief but well-researched history of Cobb’s Engine House can be found here:
https://industrialtour.co.uk/cobbs-engine-house-chimney/