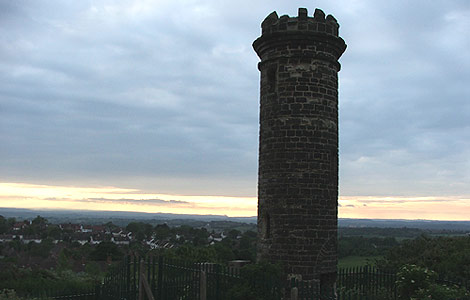 Sedgley Beacon with its tower and attendant radio masts form a prominent skyline feature of the Black Country. The beacon is the westernmost of three arched limestone ridges that have been thrust up through the central part of the Black Country Coalfield.

Near to the crest of the ridge is an old quarry from which the ‘brown lime’ or ‘black lime was worked in previous centuries. Here Sir Roderick Murchison studied the rocks when researching the nature of the Silurian rocks of Britain in the 1830’s. He describes them in his famous ‘Silurian System’ in 1839 and used their fossil content to prove that these rocks were the same as those found at Aymestry in Shropshire. Exposures of the beds immediately overlying the ‘Aymestry Limestone’ (Whitcliffe Formation) and spoil containing fossils can be found around the old quarry. The rocks seen here are yellowish silty mudstones and thin limestones of a fairly shallow marine possibly lagoonal environment where the seas were receiving significant sediment inflows from nearby land. 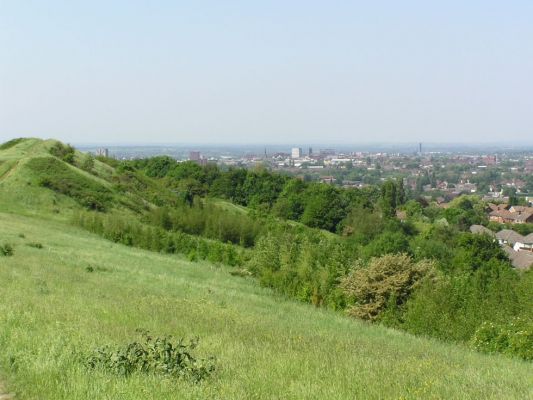 The quarry is best approached from the end of Beacon Lane (SO923943). Follow the footpath to the open fields keeping the stone tower and masts on your right and you’ll see a raised grassed mound some distance ahead. This is the covered resevoir from the top of which commanding views of the surrounding coalfield and more distant hills can be seen. To the north west, and a little way below you, you will see the old quarries and their spoil heaps. A little searching amongst the spoil will be rewarded by finding examples of the fossils of the Aymestry Limestone strata once worked here. Sedgley Beacon and Beacon Hill Quarries is one of the Black Country Geopark’s Geosites.