References cited in the text are listed at the end of the trail. Hover over words in red (or click if you have no mouse) to see a definition (usually taken from Wikipedia). The stone varieties shown in green in the trail text can be found in our Index of Stones. The index also shows some of the buildings where the stones can be found and gives reference information about the stones.

This area of central Birmingham has undergone significant redevelopment over the last two decades. Centenary Square, the focus of many exercises, realised and imagined, of civic centre planning is dominated by Symphony Hall and new Library of Birmingham (by Francine Houben and completed in 2013) and the areas west of Gas Street Basin are unrecognisable today from the derelict industrial remains and factories that were here in the 1970s and 80s. Centenary Square’s most recent redevelopment was opened in 2019. Now this region is a thriving cultural and business centre. This walking tour takes in the building stones used in old and new buildings and sculpture from Centenary Square, along Broad Street to Oozells Square, finishing at Brindleyplace.

The main source on architecture, unless otherwise cited is Pevsner’s Architectural Guide (Foster, 2007) and information on public artworks is largely derived from Noszlopy & Waterhouse (2007). This is the second part in a three-part series of guides to the building stones of Birmingham City Centre, produced for the Black Country Geological Society. 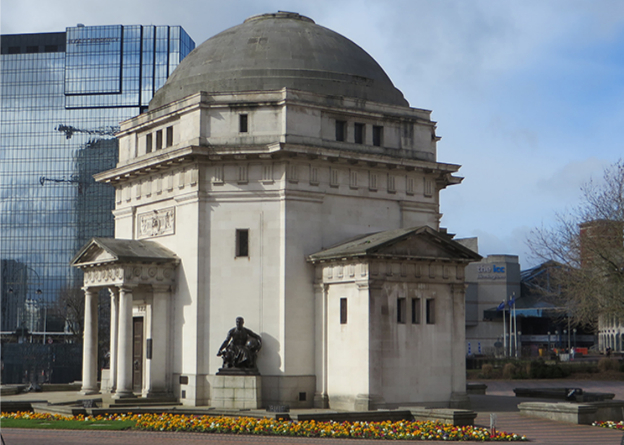 The Hall of Memory, Centenary Square

The walk starts at the eastern end of Centenary Square, at the Hall of Memory.

1. Hall of Memory
A memorial to those who lost their lives in the Great War, The Hall of Memory has a prominent position in the Gardens of Centenary Square. It is an octagonal building in the Doric order, with a pedimented entrance portico and a domed roof. It was completed in 1925 by architects S. N. Cooke and W. N. Twist. The bronze sculpture is by Albert Toft. The main building is in white Portland Stone. This is arguably Britain’s most iconic building stone and indeed it has been the stone of choice for the construction of war memorials and commonwealth war graves throughout the world, and is therefore a fitting choice for the Hall of Memory. Portland Stone comes from the Isle of Portland, a peninsula on the Dorset Coast which is now riddled with quarries and underground mines for the stone. The Portland Limestones are late Jurassic in age, deposited around 150Ma in the Tithonian Stage (known locally as the Portlandian). The building stones are known as the Freestone Member of the Portland Limestone Formation and are subdivided into the three main bed quarries as building stone, the Basebed, Whitbed and Roach. It is Portland Stone Whitbed that we see here and this is the most commonly used variety of Portland Stone. Whitbed is an oolitic limestone, and the tiny, spherical ooids are clearly visible using a hand lens. These tell us that this stone formed as a sediment in a warm, shallow tropical sea, where the tidal currents were able to roll sand grains backwards and forwards as they became coated with calcium carbonate. There is evidence of life in the seas too, in the form of shells. These can be seen as grey fossils standing slightly proud of the surface. The majority of these are species of oyster shells, mainly from Liostrea sp. and the spiny oyster Spondylus sp. Spiny oysters had barbs projecting off their shells, enabling them to anchor themselves in the sediment. Articulated shells of spiny oysters are not uncommon here.

The foundations of the Hall of Memory are in Cornish Granite. This is a grey, coarse-grained granite with two micas present; the black variety, biotite and silvery muscovite which sparkles in the sunshine. Also present are randomly orientated white feldspars, around 15mm in length. This is probably the variety of Cornish Granite from Carnsew in the Carnmenellis Pluton, one of the plutons of the Cornubian Batholith, which was intruded at the end of the Variscan mountain building event in the early Permian. The majority of the Cornubian granites of Cornwall are two-mica granites and this makes them distinctive as building stones.

Cornish Granite with both muscovite and biotite mica (left) and Portland Whitbed with oyster fossils (right). This combination of stones is seen on the Hall of Memory, Baskerville House & The Exchange – University of Birmingham (originally the Birmingham Municipal Trading Bank).

Turning north from the Hall of Memory is Baskerville House and a memorial to the eponymous letter setter and printer. 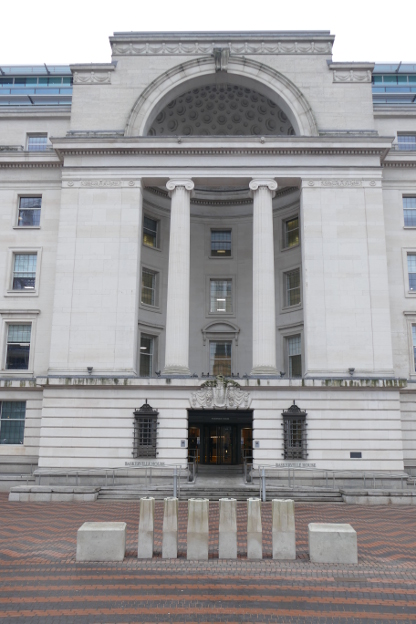 2. Baskerville Memorial
This is a memorial to the letter founder John Baskerville (1706-1775) who lived in the vicinity of what is now Centenary Square from 1748-1775. The full title of the memorial is ‘Monument to John Baskerville – Industry and Genius’. It is by David Patten and Michael P. House and represents letter punches, which spell out the word Virgil; a volume of Virgil’s poetry being the first book that Baskerville printed in 1757. The letters and inscriptions are in bronze, but once again Portland Whitbed is used to construct the monument. This too has many broken fragments of oyster shell but also contains the floret-like heads of a reef forming algae, Solenopora portlandia which was endemic in the Portland seas. Fragments of S. portlandia observed here have broken off the reef and have accumulated in amongst the shell debris.

3. Baskerville House
Baskerville House, designed by T. Cecil Howitt and completed in 1940, dominates this end of Centenary Square. Like The Hall of Memory, it too is built from Portland Whitbed on foundations of Cornish Granite, again, probably Carnsew or a similar type. Indeed this was the intention, to continue the theme of the stones used in the Hall of Memory. The ashlar masonry on the ground floor has been rusticated to give the appearance of greater ‘weightiness’ to the Portland Stone in this portion of the building. The intricate carving on the arms and garlands above the main doorway demonstrate the versatility of Portland Basebed as a decorative stone. Basebed contains far fewer fossils than Whitbed and this coupled with no string partings makes it an excellent ‘freestone’ that can be cut and carved in any direction. Above the doorway, the upper stories are in fine, smooth ashlar masonry. The apse above the doorway is fronted by ionic columns and the half-dome has a coffered ceiling. 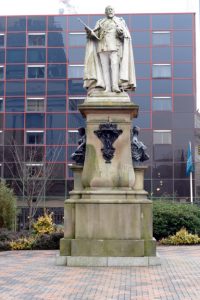 4. Statue of Edward VII
A regal statue of King Edward VII stands at the east end of Centenary Square. The spectacular plinth, adorned with bronzes is of sandstone, whereas Edward himself, sadly too high up for close examination, is in white marble. An Upper Carboniferous sandstone is used for the plinth; it is a medium grained, quartz- rich sandstone, an arenite. Evidence of liesegang banding, can be seen on the east-facing side of the plinth. The provenance of this stone is unknown, but many sandstones of this type are sourced from quarries in the Millstone Grit Group of the Lancashire and West Yorkshire Pennines.

It is not possible to ascertain the precise variety of marble used in the sculpture of Edward VII. Not only is it above eye-level, but all white marbles look pretty much the same. However this appears to be a pure white, without any grey streaks. The main source of statuary marble in the early 20th Century was Carrara in Tuscany, Italy and this is by far the most likely provenance of the stone used here. Various grades of statuary marble ‘statuario’ were extracted from the Tuscan quarries. One variety which was often used by the British Royal Family was called ‘Campanile’; it was a particularly tough marble which rang like a bell when hit with a hammer.

Walk 2 continues on the next page…

References can be found on the last page of the walk (2.3).